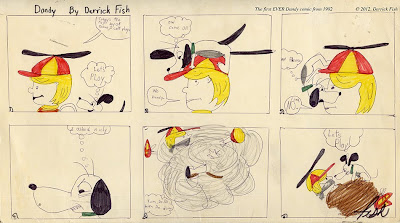 The long answer is that in 1982, when I was just a little kid, I created the comic strip seen above staring a sarcastic dog that showed that I REALLY didn't know how to draw yet and was painfully copying the design of Snoopy. Thankfully, as I got a little better, so did the strip and his design.

In October of 2001, I launched "Dandy & Company" as an online webcomic, beginning with strips and stories stockpiled from self published fanzines that I began making with the characters in 1994 and the strip has continued in one form or another since then.

At it's heart, "Dandy & Company" is a comic about a somewhat naive and optimistic kid named Bernard and his sarcastic, prankster of a dog named Dandy. It's also a love letter to every genre of comics I've ever enjoyed, so it's standard operating procedure for their every day adventures to lead to evil doubles, alien invasions and time hopping madness. Anything and EVERYTHING can, has and WILL happen here! I hope you continue to enjoy the craziness! 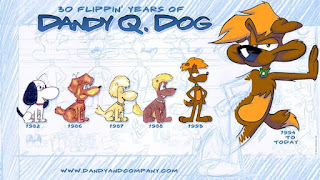 Be Dandy's friend on Facebook! It's an awesome way to keep up on current strips and gab with Dandy Q. Dog himself!