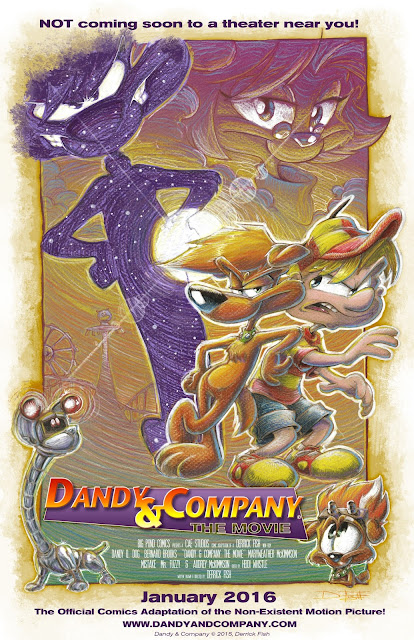 So, I can almost hear you all asking me, "There's going to be a Dandy & Company MOVIE!?!"

Well, maybe SOMEDAY, but not just yet. See, as a creator, I've been told countless times "Someone should make a Dandy & Company movie!". And HECK, I agree. I'd LOVE to see these characters that I've been drawing for over THIRTY YEARS made into a movie. But that's not happening anytime soon.

As such, I've decided to do the next best thing. And so, starting in January of 2016, the weekly webcomic becomes "Dandy & Company: The Movie! The Official Comics Adaptation of the Non-Existent Motion Picture!"

That's right. For the full 52 weeks of 2016, I'll be creating a longform comic book adventure that is exactly what I WOULD make into a movie if I could! It's going to be the ULTIMATE DANDY & COMPANY ADVENTURE!!!! And what better way to announce a new FAKE movie than with a FAKE movie poster where I do my level best to rip off movie poster master artist, Drew Struzan!
Posted by Dee Fish at 9/21/2015

Be Dandy's friend on Facebook! It's an awesome way to keep up on current strips and gab with Dandy Q. Dog himself!